Brassica vegetables include broccoli, cauliflower, and cabbage, and other closely related, famously healthy and cancer-fighting vegetables. (See below for a list of Brassica and cruciferous vegetables, also called crucifers.)

You might be as surprised as I was to learn of the controversies surrounding these vegetables. They have anti-cancer effects but can also suppress thyroid function. How much of these vegetables should we eat? Should we eat them raw or cooked?

There are many scientific studies on both anti-cancer and anti-thyroid effects, but the arguments are technical.

However, the conclusions from both sides are about the same: a relatively small amount of these vegetables is beneficial! 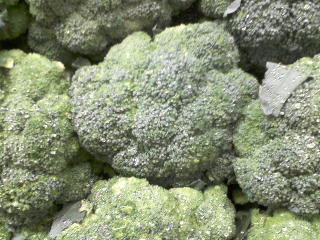 Perhaps the best strategy for the average person might be to:

And, as with every food "family," the cruciferous vegetables are not for everyone. Some people's metabolisms are unsuited for so-called "sulfur foods." Likewise, cultured (fermented or pickled) crucifers aren't for everyone.

Notice that broccoli, cauliflower, and cabbage are the same species! They differ only in how they have been bred, and thus are classified as different cultivars.

The controversy has to do with these vegetables' unique phytochemicals ("plant chemicals") called glucosinolates. When a Brassica vegetable is cut or chewed, an enzyme (myrosinase) within the vegetable breaks down its glucosinolates into various unique chemicals. Different cruciferous vegetables yield different amounts of some of these chemicals.

This neglected fact has caused confusion in cancer studies and caused conflicting recommendations.

And, studies on the effects of cooking have been somewhat contradictory.

Raw vegetables retain all of the glucosinolates.

Cultured vegetables should be raw, not pasteurized; and should be traditionally made without vinegar. Pasteurized vegetables are essentially cooked and have no beneficial bacteria.

Traditionally made sauerkraut and kim chee (or kimchi) are available in natural food stores. You'll find them in jars in the refrigerator section as perishable--they will not be canned or in "shelf-stable" jars.

There are instructions in the cookbook Nourishing Traditions, by Sally Fallon of the Weston A. Price Foundation, for homemade cultured Brassica vegetables, including sauerkraut, cortido (Mexican), kimchi (Korean), and tsukomono (Japanese).

According to the background information in a study in Food and Chemical Toxicology, heating these vegetables to "high temperatures":

Steaming for up to 20 minutes showed no loss of glucosinolates in the Food and Chemical Toxicology study. The study did not address the loss of myrosinase. The Weston A. Price Foundation review, however, reports that steaming eliminates two thirds of the glucosinolates.

Most roots and greens steam marvelously; however, bok choy and some others are bitter when steamed. See How to steam vegetables.

Stir frying also showed no loss of glucosinolates in the Food and Chemical Toxicology study, although the loss of myrosinase was not addressed.

Stir frying is a terrific way to cook many of the crucifers. See How to make stir fry vegetables and my favorite bok choy stir fry.

In animal and human studies, glucosinolate products have been shown to:

A study by the Roswell Park Cancer Institute (Buffalo, New York) showed that just three servings a month of raw broccoli, cauliflower, or cabbage reduced the risk of bladder cancer by about 40%.

This study was of 1000 patients treated at Roswell Park; about one third had bladder cancer and the rest had non-cancer conditions. An unusually good study: every diagnosis was definite, many different foods were individually considered, and it's expected that people can clearly remember whether they eat these vegetables and whether they eat them raw.

This study may be the best evidence on the value of raw Brassica vegetables over cooked.

However, the glucosinolate products also act as goitrogens, that is, as chemicals that inhibit thyroid function. They slow the thyroid gland by making it more difficult for it to absorb iodine.

The most studied phytochemicals that derive from glucosinolates are:

Current Science: Cancer Modulation by Glucosinolates: A Review
A literature review of the scientific research about glucosinolates, their toxic and anti-cancer effects, and how they are believed to work.

Weston A. Price Foundation: Bearers of the Cross: Crucifers in the Context of Traditional Diets and Modern Science
A contrarian view: the case against Brassica vegetables. Emphasizes goitrogens and is skeptical about cancer prevention. Good information about how glucosinolates are affected by cooking and fermentation.

Vegetable Snacks - Raw cabbage instead of chips? and more

How to Steam Vegetables - Steam your crucifers