Scientific facts about blueberries reveal their antioxidant and anti-inflammatory benefits! Blueberries are colored blue with anthocyanins, a family of antioxidant pigments with many special properties. 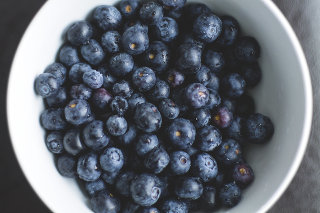 The blueberry is a true berry, closely related to the bilberry and the cranberry. It's native to North America and has been eaten for thousands of years, but has been cultivated only in the 20th century.

The season for fresh blueberries is June through August.

It's believed that fresh blueberries, and near-fresh such as frozen or freeze-dried, best preserve the antioxidant capacity. Loss of antioxidants and other nutrients occurs when blueberries are cooked, baked, canned, or bottled.

Nevertheless, commercial juice has been studied for antioxidant potency (see Which fruits are best in a healthy fruit juice) and also used in clinical studies like the study on improved memory in older adults, referenced below.

However, the ideal juice would be a fresh smoothie made with fresh or frozen whole blueberries!

What makes blueberries so blue? It is the anthocyanins, a family of antioxidant pigments.

Anthocyanin pigments color many other dark red, blue, and purple plant foods. But blueberries are a superior source of anthocyanins!

Anthocyanins combat oxidation, the wear and tear on our tissues. Oxidants, or free radicals, are produced by normal metabolism, by aging, and by toxins from the environment. Oxidants damage tissues; "antioxidants" prevent and sometimes reverse tissue damage.

Due to concentrated anthocyanins, blueberries, along with bilberries and blackberries, are near the top of the range in the antioxidant potency of common fruits and vegetables.

ORAC (oxygen radical absorbency capacity) tests measure the antioxidant value of foods. 100 grams, or 3.5 oz., of blueberries measures 3200 on the ORAC scale. Along with blackberries and bilberries, they are near the top. For comparison, the same amount of an orange measures 2400, and red grapes 1100.

Benefits For The Brain

One of the astonishing facts about blueberries is that they benefit the brain.

The anthocyanins of blueberries are believed to be anti-inflammatory in the body, gut, and brain. Researchers believe the anthocyanins pass through the blood-brain barrier and concentrate in critical areas of the brain.

Animal studies show that blueberry consumption slows and even reverses brain aging and improves memory, learning, and motor function. Experiments with rats and mice are exploring possible use of blueberries in Alzheimer's and Parkinson's diseases.

Now some clinical studies are being conducted with humans.

The anti-inflammatory and other properties of blueberries are being studied for use against cancer, heart disease, heart failure, hypertension, hyperlipedimia, diabetes, intestinal disorders, and liver disease.

These and other facts about blueberries promise healthy benefits from that blueberry smoothie or delicious bowl of fresh blueberries!