Researchers believe that the health benefits of pomegranate juice, such as cardiac and anti-cancer benefits, come from the antioxidant activity of the juice.

Disease, toxins, aging, and even normal metabolism all generate free radicals, also known as oxidants, in the body. Free radicals damage cells and tissues through inflammation and other destructive processes.

Antioxidants counter free radicals and reverse this damage. Antioxidants are nutrients: vitamins, minerals, thiols, and flavonoids, all found in food. Many phytochemicals--chemicals made by plants that remain inside the plant--are potent antioxidants. 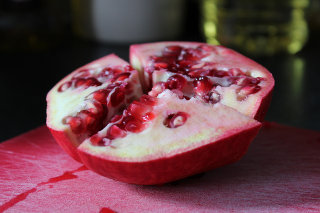 Researchers believe that more than half of the antioxidant activity in pomegranate juice is from punicalagin, a polyphenol.

The high antioxidant potency makes it highly likely that the health benefits of pomegranate juice extend far beyond the benefits shown so far in clinical studies, and for people besides the cardiac and cancer patients that were studied.

These and other studies also showed that daily pomegranate consumption:

Atherosclerosis is the hardening of the arteries due to fatty deposits. The patients in this study all had a 70% - 90% narrowing of the carotid artery (the artery to the brain).

In one year, the control group got worse: those patients had a 9% increase in the measure of artery blockage. Their blood pressure remained the same.

But, the experimental group drank just 1.7 oz. of pomegranate juice every day (as supplied by the researchers). After one year, these patients had an up to 35% decrease in the measure of artery blockage. Their systolic blood pressure decreased 21%.

There is no drug that reverses atherosclerosis, but in this study, pomegranate juice did.

Ischemia is a lack of oxygen to the heart. In people with coronary heart disease, ischemia can be triggered by exercise.

In this study, patients had myocardial perfusion scans both at rest and during a stress test. After three months, the control group's scores of ischemia at rest stayed the same, but their stress-induced ischemia scores worsened by 18%.

The experimental group drank 8 oz. of pomegranate juice every day. After three months, these patients' scores of ischemia at rest stayed the same, but their stress-induced ischemia scores improved by 17%. (They also had a 50% decrease in angina attacks.) The researchers concluded that pomegranate juice consumption decreases ischemia.

Laboratory and animal studies have shown anti-cancer effects of pomegranate juice for:

A major clinical study gave pomegranate juice to men who had been treated for prostate cancer, were at risk for a recurrence, but had no treatment options other than following their prostate-specific antigen (PSA) scores.

In this study, men drinking 8 oz. of pomegranate juice daily took an average of more than four years (54 months) for their PSA score to double, while the control group's PSA scores doubled in a little over a year (15 months).

Journal of Agricultural and Food Chemistry: Comparison of Antioxidant Potency of Commonly Consumed Polyphenol-Rich Beverages in the United States