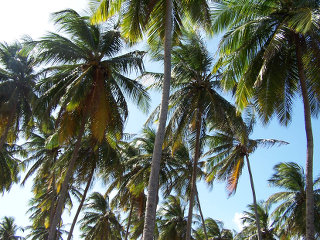 Coconut oil benefits both overweight and underweight people because it:

Overweight people can lose weight either by replacing other oils (such as cooking oil or oil in junk food) with coconut oil, or by adding coconut oil to meals, as discussed by naturopathic doctor and coconut expert Bruce Fife in The Coconut Oil Miracle and Coconut Cures.

The weight loss program in Eat Fat Lose Fat, by Mary Enig and Sally Fallon, requires the consumption of healthy fats including coconut oil, and extra coconut oil with each meal.

Coconut oil weight loss effects are not caused by starving the body. (This is immediately apparent from the taste and enjoyment of consuming coconut oil!)

A form of coconut oil, MCT oil, is in fact used to treat malnourishment.

MCT oil is fractionated coconut oil. (MCT stands for "medium-chain triglycerides.") It consists of four fatty acids from coconut oil: caproic acid, caprylic acid, capric acid, and lauric acid, in different proportions than in coconut oil. (This is for the convenience of industry, which uses lauric acid in soap manufacture.) Coconut oil could just as well be used, but MCT oil is the derived product available for hospital use.

The following article is a review of the clinical use of MCT oil for many different conditions and diseases. These include digestive malabsorption, gallbladder disease, post-surgical patients, undernourishment, epilepsy, disorders of lipid metabolism, and obesity.

The American Journal of Clinical Nutrition: Medium-Chain Triglycerides: An Update

The following studies focus on MCT oil, derived from coconut oil. One can generalize to coconut oil, as noted above.

Metabolism increases with the use of MCT oil, but science seems to be uncertain about the mechanism. However, the evidence suggests a role in weight loss that would be interesting to pharmaceutical companies. The following article is a review of studies and experiments about these effects.

The Journal of Nutrition: Physiological Effects of Medium-Chain Triglycerides: Potential Agents in the Prevention of Obesity

The following study seems to create the conditions suggested by Bruce Fife and Mary Enig to replace typical dietary oils with coconut oil.

In this three-month study, the same prepared foods were given to all subjects for all meals, with the sole difference that the bread given for breakfast was made either with an MCT oil or with vegetable oil (soybean and rapeseed [canola] oil) that contained long-chain triglycerides (LCTs) but no MCTs. The LCT vegetable oil used in the study are same oils commonly used in American foods.

The Journal of Nutrition: Dietary Medium-Chain Triacylglycerols Suppress Accumulation of Body Fat in a Double-Blind, Controlled Trial in Healthy Men and Women

This same research group concludes that the result is due to fat metabolism differences between the overweight and the non-overweight.

The Journal of Medical Investigation: Research on the Nutritional Characteristics of Medium-Chain Fatty Acids

The Coconut Oil Miracle by Bruce Fife - An introduction to coconut oil.

Coconut Cures by Bruce Fife - all about coconut oil and coconut products.