Coconut oil benefits are numerous and astonishing. It's hard to believe that this healthy fat can do so many things! And the following points only scratch the surface.

Coconut oil is easily digestible and makes many bodily processes work better. Our bodies are substantially made of saturated fat, in the brain, heart, lungs, kidneys, and every cell of the body. A healthy saturated fat in the diet like coconut oil is absolutely necessary. (More here on coconut oil nutrition.) 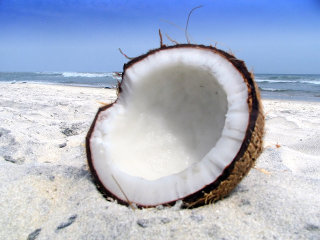 On this page: Coconut oil benefits include:

In an age of antibiotic-resistant bacteria, how valuable is an antimicrobial substance that can never create resistance? How about a substance that also kills viruses and fungus?

When coconut oil is eaten or put on the skin, it is broken down into its medium chain fatty acids. These medium chain fatty acids destroy the fatty outer membrane of "lipid coated," or fat coated, microorganisms. Lipid coated microorganisms can't develop resistance to this kind of attack. In fact, coconut oil can kill bacteria that are resistant to pharmaceutical antibiotics.

One of the coconut oil benefits is that it and its medium chain fatty acids kill bacteria, viruses, retroviruses, fungi, protozoa, and parasites.

It kills "bad" bacteria that have lipid coatings. There is quite a list of these bacteria, which include skin infections such as Staphylococcus aureus, infectious diseases such as Hemophilus influenzae, gut infections such as Helicobacter pylori, suspected causes of artery inflammation such as Chlamydia pneumoniae, and foodborne illness such as Escherichia coli. Coconut oil does not harm the "good" gut bacteria that we need for digestion. The "good" gut bacteria have sugar coatings instead of lipid coatings.

It kills lipid-coated viruses, including measles, influenza, Epstein-Barr, cytomegalovirus (CMV). and hepatitis C. Bruce Fife reports that when the medium chain fatty acids of coconut oil are transported to the liver, which is their mode of digestion, they also are antiviral in the liver. The common cold, unfortunately, is not a lipid-coated virus and is unaffected.

It kills HIV and HLTV-1. Coconut oil has been used in Philippine clinical trials against HIV.

Coconut oil kills yeast. One of its medium chain fatty acids, caprylic acid, is used as a treatment for yeast infections.

It kills giardia, which is a common protozoan gut infection.

Coconut meat is used in India to expel tapeworms.

Coconut oil benefits the absorption of nutrients from food. Thus it has been used in the treatment of conditions of malabsorption, malnutrition, and subclinical malnutrition. Coconut oil or its medium chain fatty acids are used in hospital feeding formulas, baby formulas, and energy foods.

Many people have difficulty digesting fats, due to lack of digestive enzymes or lack of bile. People whose gallbladder has been removed have lost their bile storage system, making it difficult for them to digest fats on demand.

Unlike other fats, the medium chain fatty acids of coconut oil don't need bile or enzymes for digestion. They are absorbed directly through the gut and moved through the portal vein to the liver for conversion into energy.

Thus, coconut oil is easily digestible by anyone and can be the best healthy saturated fat for those who have digestive problems from many different causes.

Coconut oil improves the absorption of minerals and other nutrients. Bruce Fife lists these as: minerals; B vitamins; fat-soluble vitamins, which include A, D, E, K, and beta carotene; and protein.

Research with animals showed that coconut oil fostered absorption to the point of eliminating symptoms of vitamin B deficiency and of rickets.

Coconut oil kills bad gut bacteria, including H. pylori, which causes stomach ulcers, and viruses, including measles, which have been implicated in Crohn's disease and autistic gut disease. It leaves untouched the "good" gut bacteria that help us digest food and that generate nutrients for our bodies.

The medium chain fatty acids of coconut oil can benefit the energy levels of people who have various difficulties with cellular energy production.

The liver uses medium chain fatty acids to make energy for itself and to produce "ketone bodies" to circulate to the rest of the body. Ketone bodies supply fuel to the cells to make energy; unlike glucose, they don't require insulin or special enzymes to enter the cells.

Energy Metabolism in the Brain

In neurological illnesses, including Alzheimer's, Parkinson's, and multiple sclerosis, it has been shown that areas of the brain are energy deficient. These parts of the brain are starved for fuel, due to metabolic defects that deny glucose entry to the neurons.

Ketone bodies, however, made by the liver from coconut oil, can deliver fuel to these energy-starved parts of the brain and bypass the metabolic defects of the neurons. MCT (medium chain triglycerides) oil derived from coconut oil, or coconut oil itself, is being studied as a treatment for these diseases.

Dr. Mary Newport, MD, researched MCT oil and coconut oil on behalf of her husband; her research appears on her website CoconutKetones.com.

Her article What If There Was a Cure for Alzheimer's Disease and No One Knew? (PDF) describes her husband's experience and explains in lay terms how coconut oil benefits patients with Alzheimer's as well as other neurological disorders.

Coconut oil prevents blood sugar swings and sugar cravings. Its medium chain fatty acids foster the use and production of insulin and glucose in the body. This may be a major factor in coconut oil thyroid effects.

Coconut oil speeds up metabolism, especially in overweight people, according to studies. Yo-yo dieting leads to slower metabolism and an inability to lose weight, so coconut oil can help in weight loss. (More on coconut oil weight loss.)

However, it also helps with weight gain for underweight people by enhancing nutrition and correcting slow metabolism caused by undernourishment.

Coconut oil helps normalize thyroid function. Along with good nutrition, the thyroid can improve its function with coconut oil. This is anecdotal but is demonstrated by higher body temperature, increased metabolism, and weight loss. According to Mary Enig and Sally Fallon in Eat Fat Lose Fat, coconut oil also normalizes an overactive thyroid. (More on coconut oil thyroid effects.)

Coconut oil is anti-inflammatory as another of the coconut oil benefits. It is thought to curb inflammation in part by improving cellular function. The cells become more efficient in removing toxins.

Perhaps this, or the effect on the fat composition of the body, results in coconut oil's improvement of chronic pain.

Coconut oil acts as an antioxidant:

The American Journal of Clinical Nutrition: Medium-Chain Triglycerides: An Update
Medium-chain triglycerides are composed of medium-chain fatty acids. The MCT oil discussed in the review is fractionated coconut oil, derived from coconut oil.

Dr. Mary Newport, MD: What If There Was a Cure For Alzheimer's Disease and No One Knew? (PDF) with more research on her website: CoconutKetones.com

Books - Reviewed On This Site